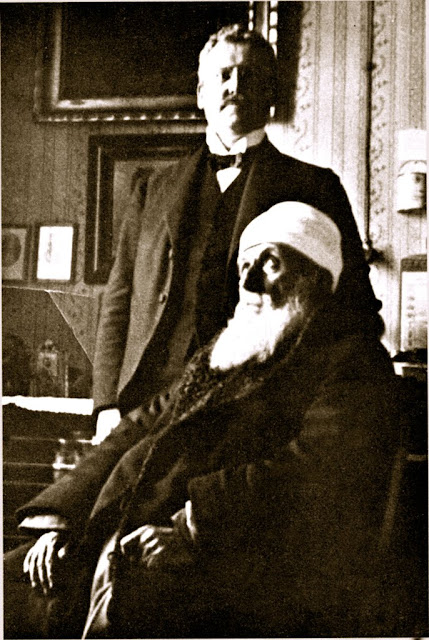 Blessed, doubly blessed, is the ground which His footsteps have trodden, the eye that hath been cheered by the beauty of His countenance, the ear that hath been honoured by hearkening to His call, the heart that hath tasted the sweetness of His love, the breast that hath dilated through His remembrance, the pen that hath voiced His praise, the scroll that hath borne the testimony of His writings.
- Baha’u’llah (’Tablets of Baha’u’llah revealed after the Kitab-i-Aqdas’)

uniqueness of 'Abdu'l-Baha's visit to the West

"Until now it never happened that someone from the East. impelled by the promptings of his conscience, should come to the West to see the friends of God and to associate with respected individuals with such sincere love and friendship and without any political or commercial motive or the desire of sightseeing. It is without precedent and is not recorded in any history. If others have come, it has been to sightsee or for commercial or other reasons"
- 'Abdu'l-Bha (Words of 'Abdu'l-Baha, October 22, 1912, San Francisco, Mahmud's Diary)

“Look at the history of the world and try to find a parallel instance in which a native of the East has come to the countries of the West, particularly America, and called out to them in the churches and meetings there, raised the divine call in many of the large cities and invited everyone to the Abhá Kingdom, with no one taking exception. Nay, on the contrary, those present at the gatherings have heard him with patience and unbounded joy. These things have been achieved solely through the confirmations of the Abhá Kingdom.”
- 'Abdu'l-Baha (Words of ‘Abdu’l-Baha, September 13, 1912, Chicago, Mahmud’s Diary)

This site is warmly dedicated to the memory of my father, Muhammad Naderi, who passed away in Canada in 1989.
- farhad naderi

Baha’i Multimedia Resources is comprised of 74 sites - this site being one of them. As of January 2020, 21,000 documents have been uploaded to these sites, resulting in 3 1/2 million pageviews by visitors. Currently there are 2800 email subscribers.

* Tablets of 'Abdu'l-Baha in Star of the West

* Photos of ‘Abdu’l-Bahá in the Holy Land

* Gems of insight from ‘Abdu’l-Bahá

Star of the West, The Baha'i World volumes, Baha'i News, Andalib, and other sources.